Home > AppBakery  > Gamification as a Patient Engagement Tool – How is it Faring?

31 Jan Gamification as a Patient Engagement Tool – How is it Faring?

Research has shown that treatment outcomes are better when patients are actively engaged in their treatment and treatment decisions. So, is the healthcare industry game for patient engagement?

Gamification in healthcare has been talked about as patient engagement tool in 2017. It was discussed at several health and technology conferences, like the AMIA2017 and DPharm2017, including others, highlighting how companies are still experimenting with this concept. DPharm2017 saw this patient engagement tool discussed in terms of improving kid’s emotional and mental health using bio-responsive games. At AMIA2017 speakers from Harvard Medical School, University of Pennsylvania, and Oslo University Hospital/University of Oslo provided insights on using gamification techniques to engage patients in chronic illness management.

Just like for everyone else, games are fun for patients too. Games work by engaging the reward center of our brains which feeds on awards, bonus points, stars or any other achievement. So if patients get rewarded for, say, taking their meds, going out for a walk, or just following their physicians instructions – they may become more interested and “engaged” in caring about their own health. This may help the physicians too, by saving them time and allowing to interact with their patients in a better way.

In literal terms gamification is – “The application of game elements and digital game design techniques to contexts that are not themselves games, but everyday problems, such as business dilemmas, healthcare issues, and social challenges.”

Our friends at Applied Informatics are developing a mobile research study app based on a card sorting game. This app will be used for motivational interviewing of young men about their sexual activity, with the goals of related behavior modification. The subjects will be prompted to play the card sort game in the app and define their most important cards. Based on the data gathered these young men will receive counseling from lifestyle coaches through the app. This app is a part of a behavioral study designed by Columbia University on young men’s sexual activity. 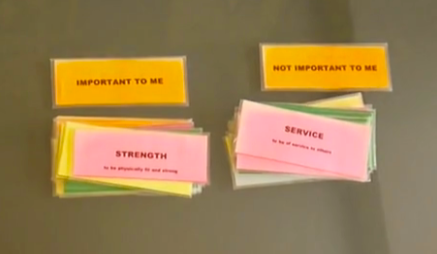 Games to Engage Patients in their Care Better

A Prescription Video Game for ADHD

In recent years, the cases of ADHD have been rising around the world and children are often given drugs to treat the disorder.

A Boston-based company Akili Interactive Labs has developed a product that takes a different approach by using a game to stimulate specific cognitive neural systems in the brain. They claim they provide a solution in form of “digital treatments with direct therapeutic activity delivered not through a pill but through a high-quality action video game experience.”

According to the company, results from the yet largest randomized, controlled clinical trial of its video game-based pediatric ADHD treatment involving 348 children and adolescents with ADHD are positive. Subjects using Akili’s video game showed a statistically significant improvement in attention performance, compared with an active control, which was also a video game.

These “digital treatments” has been developed after extensive research by neuroscientists and uses stories, music, and art along with rewards to keep the patient engaged better and adhere to therapy. The company which has a range of programs to treat cognitive deficiency and other neurological or psychiatric symptoms, plans to file for regulatory approval with the US Food and Drug Administration in the first half of 2018, for what would be the first such “digital” prescription product.

A Bioresponsive Game for Better Engagement and Adherence

A very recent example, Mighteor is a bioresponsive game for kids which helps them deal with behavioral and emotional challenges and teaches them how to manage emotions in daily life.

With the belief that children learn best through play and exploration, Neuromotion Labs co-founder Jason Kahn shared the results of how this game platform has been helping kids in schools, clinics, and in homes of over 150 families, in the past year at #DPharm2017.

Developed and tested at Boston Children’s Hospital and Harvard Medical School, Mighteor is built for 6-14 year olds, who can play the game whenever and wherever they want. They recommend that the kids play this game for at least 45 minutes per week.

You ask how does it work? The creators believe that the game works by:

In clinical trials Mighteor has been shown to lower parent stress by 19%, decrease oppositional behaviors by 40% and reduce outbursts by 62%.

This may be an old example, but seemed to be an effective one, showing positive results published in Journal Pediatrics.  Remission – A project of Hopelab – is a video game available free of charge and can be downloaded from the site. It educates the children on how drugs used in their treatment fights cancer within their bodies. What the player sees on the screen, helps them visualize what is happening inside their bodies, how is chemo or radiation therapy actually working for them. This game was released in 2006, and data collected over 2 years showed the effectiveness of this game.

The study showed children who played Remission took their drugs more consistently and maintained higher levels chemotherapy as compared to group of children who did not. The researchers concluded that the video game intervention had a positive biological as well as psychological impact, leading to increased “cancer related self-efficacy” and faster acquisition of cancer-related knowledge.

The game which is available in English, Spanish, and French is popular in many countries. Re-Mission has helped more than 135K patients adhere to cancer treatments and gain a greater sense of control over their disease. Hence, a successful example of how a game helped increase patient engagement  and involvement in their disease care.

What is the success of gamification as a patient engagement tool? Challenges?

Although viewed as a potential method to increase to patient engagement, wellness adherence, and outcome improvement by many healthcare leaders, some think that there are several challenges to be met before gamification can be used as successful patient engagement tool.

Couple of major challenges that the healthcare industry faces in engaging patients the fun way are:

Privacy concerns – Health care providers need to be very careful about not violating federal patient privacy regulations – a requirement that can make it difficult to target games to the patients who will benefit the most from them.

Building engaging games – Companies are pushing it hard to build new games that are engaging enough to keep patients interested. It may be hard to make a game based on a serious health issue and still keep the fun part alive.

So far the success has been limited to areas such as population health, chronic disease management and provider education. Companies have been drawing inspiration from tried and tested classic games like Jeopardy and Solitaire, where customers are already comfortable with the game mechanics.

Last April, another group, an international consortium called Panacea Gaming Platform kick-started the mHealth gaming industry with a project that aims to develop a robust technology platform to enable game development for use in the clinical treatment of those with disabilities. It currently consists of 18 mHealth and gaming developers from Canada, Belgium, Finland, Spain, Turkey, South Korea and Slovenia. Leading companies in this consortium are planning to develop “safe, effective, and clinically applicable” games by setting up clinical guidelines, testing standards, and quality control processes in collaboration with their partners in game development.

It will be interesting to learn how games weave into the fabric of clinical trials, clinical research, and the overall healthcare industry in the coming years, enhancing patient engagement. We will closely follow the thought leaders in this arena sharing their views at upcoming #SCOPE2018 and other major healthcare conferences of 2018.

Shweta is senior marketing and content manager and also provides research and engagement support for Applied Informatics/TrialX products. She hosts women's health/infertility/reproductive medicine talk series driven by her personal experiences for TrialX CureTalks. A San Jose State University Graduate, she holds dual masters degree in Biochemistry and Nutrition Science, and is passionate about the science behind the diverse life phenomenas. She also holds certifications in Digital Marketing from Hubspot Academy, Protecting Human Research Participants from NIH and in Intellectual Property in Biotechnology from WIPO.