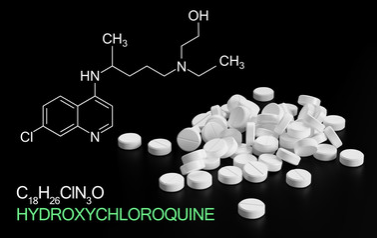 6/8/20 Update:  On June 5, 2020, Lancet retracted their paper on Hydroxychloroquine, referenced in my initial post several days prior. I have noted the retraction in the blog  but kept the reference since the announcement from Dr. Fauci came just days after the study was released. The Lancet study had no impact on the basis of the blog which highlights the need for public figures such as politicians to steer clear of causing any undue bias while a drug is being evaluated in a clinical trial.

There are more than 1800 registered clinical trials being conducted worldwide to treat and/or prevent COVID-19 but no drug has been discussed as much as Hydroxychloroquine aka HCQ. HCQ, an FDA approved antiviral medication which is used to prevent and treat malaria, is being evaluated for the treatment and prevention of COVID-19.  The medication is not new, it has been approved for medical use in the United States since1955. However, the novel coronavirus outbreak sent ER and ICU physicians across the country scrambling to find treatments for the onslaught of COVID positive patients admitted to hospitals. In response, the Food and Drug Administration authorized emergency use of the medication on March 28, 2020.

Consequently, the drug gained notoriety when U.S. President Donald Trump touted the benefits of the drug  to  an anxious and weary nation in early April, the near peak of the pandemic in New York state. While the United States along with the rest of the world desperately needed a glimmer of hope, a reinsurance that we are in control of the virus rather than the virus controlling us, the statement was met with skepticism and fact checking.

President Trump later doubled down on use of the drug when he announced this month that he is taking the medicine as a preventative measure in response to the news that some white house staff members tested positive. Treatment for COVID 19, or any other medical condition should never become political however, with current US politics so divisive, the drug is now facing an uphill battle for clinical trial recruitment due to a combination of bad publicity and early reports indicating a lack of efficacy.

Moreover, approximately 20% of clinical trials being conducted globally are studying hydroxychloroquine. Several academic medical centers like  Penn Medicine, are running clinical trials to include testing on hospitalized patients, self quarantined patients and healthcare workers who are exposed to the virus. Yet, Dr. Anthony Fauci, the top Infectious Disease expert in the United States, announced this week that HCQ is not effective in treating COVID-19. Fauci’s statement came on the heels of a recent paper, published in Lancet Journal which analyzed hospitalized 96,000 patients treated for COVID across 6 continents worldwide from December 20, 2019-April 14, 2020. The study concluded that no benefit could be found for patients taking HCQ or chloroquine. There was an decrease in hospital survival and an increased frequency of ventricular arrhythmias for those on the drug. The study published by Lancet has since been retracted and no word on whether Dr. Fauci will revise his stance. It is not clear if the paper had any influence on Dr. Fauci’s decision to state HCQ is ineffective for COVID-19.

However, the emergence of Remsidivir as a preferred treatment and the political polarization surrounding the drug, it is becoming difficult to find patients willing to participate in a HCQ trial, leading to the possibility that these trials may soon cease.

Ultimately, as researchers we have a responsibility to remain unbiased in our study conduct, follow GCPs and allow data to determine if a drug is effective. However once a drug becomes widely discussed in media and politics come into play, it begins to influence a patient’s perception, making it difficult to recruit patients and limits the ability of the researcher to properly evaluate the drug. The pandemic has taught us all lessons worth noting but the need for clinical trials to persevere and for research volunteers to continue to raise their hand is imperative. Lastly, when a public figure like the president of the United States is endorsing a treatment, we must remain steadfast in our commitment to science.

Erica brings more than 10 years of clinical research experience. She is well versed in clinical research coordination and management, especially within academic medical centers. Her strength is her knack for finding creative solutions for overcoming recruitment hurdles. Erica works directly with study teams to educate them on using the data driven recruitment metrics behind iConnect, where patients match with trials. She is an iConnect recruitment specialist focused on helping teams achieve target recruitment goals.