Let there be SIGHT! Reversing Blindness with Retinal Gene Therapy. 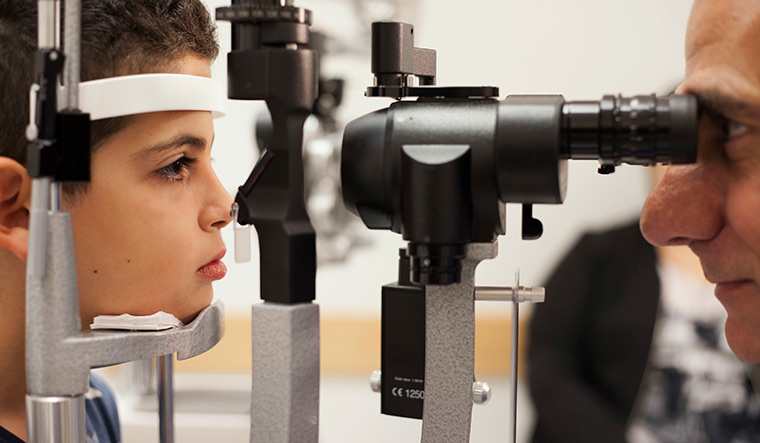 Pathbreaking treatment: Dr Albert Maguire checks the eyes of Misa Kaabali, 8, at the Children’s Hospital of Philadelphia. Misa was 4 when he received gene therapy treatment | AP

The Food and Drug Administration of the United States has approved a pathbreaking gene therapy treatment for a form of inherited blindness. This is the first of any such treatment for a genetic condition approved in the US. Named Luxturna, the gene therapy treats a condition called Leber’s congenital amaurosis (LCA) wherein people have two faulty inherited copies of the RPE65 gene. The therapy replaces these faulty genes with normal versions, thus erasing the mutations’ harmful effects. A single injection in each eye is enough to improve lost vision.

The presence of two copies of faulty RPE65 (one from each parent) gradually leads to severely impaired sight in childhood or adolescence. Luxturna can stop and even in some cases reverse the effects of this condition.

In this therapy, a benign virus with a functional version of the gene is injected directly into the retina. Once in the eye, the gene can do some of the work that the patient’s own mutated copies cannot, which stops the progress of the disease, and in some cases, improves vision. The FDA approved Luxturna after a stage three clinical trial, in which patients who received the drug could navigate an obstacle course at night significantly better than those who received a placebo injection. Some patients who got the injection recovered their ability to do things like read and play sports, too.

“People born with this mutation have severely poor vision, and, as they get older, the disease gets worse because the cells in the back of the eye, where vision begins, die off and the individual becomes completely dependent,” says Dr Jean Bennett, cofounder and advisor at Spark Therapeutics. Dr Bennett and her husband Dr Albert Maguire are the doctor couple responsible for this breakthrough gene therapy research.

Listen to Dr. Bennet and Dr. Maguire talk about the research on CureTalks

For Jean Bennett and Albert Maguire, sharing a human brain in a neuroanatomy class during medical school stirred up a personal chemistry that bound them in marriage. It was the beginning of a 25-year professional partnership as well—a collaboration that has yielded one of the first successful demonstrations of gene therapy in humans.

At first, the couple experimented on congenitally blind mice. But, by coincidence, it turned out that Penn’s Veterinary School housed a colony of blind dogs.

Maguire initially treated three dogs, injecting a virus into one of their eyes. The protein shell of the virus, once inside a cell, melted away to leave only a piece of DNA that could make the enzyme that the dogs’ cells could not make on their own.

Days after the injection, it was reported that the dogs were turning in circles. It seemed like they were trying to look around them with the eye that had been treated. Within weeks, electroretinograms confirmed that the dogs could see. More impressively, when Bennett ran them through the obstacle course, they were able to navigate it safely and quickly, reported Penn Medicine.

It was a successful trial. At the end of the experiment, when they had all of their data, the couple decided to adopt them. Two of these initially treated dogs, Mercury and Venus, are now living at their house.

The couple finally moved to human trials in 2007. Safety was the utmost priority in human trials. The treatment surpassed all expectations. The first three young adults treated—all legally blind, with vision worse than 20/200 and a small visual field—could even read additional lines of an eye chart after the treatment.

The stage 3 findings of the trial, published in medical journal The Lancet, evaluated 21 patients in the treatment group and ten others randomised to a control group. A year later, all of the controls had the procedure, too. And, all have done great—as have others in the earlier clinical trials.

The crux of the research was the invention of a mobility course to evaluate a person’s ability to navigate obstacles on a winding pathway under low light conditions. A test of real life, it is a crucial complement to standard assessments of visual field, visual acuity and imaging the layers of the retina.

In addition to being the first gene therapy for reversing blindness, Luxturna is also the first AAV (Adeno-associated Virus) viral vector product approved for clinical use in the United States. AAV is a recombinant or a genetically engineered virus, which in humans does not cause any significant disease. Manufacturing the gene-carrying virus and injecting that first patient was done at Children’s Hospital in Philadelphia by Maguire.

People who had RPE65 form of LCA were the right candidates for this treatment. In this process, first it will be established whether these people have enough functional retinal cells. Then, they undergo a procedure called vitrectomy where the back of the eye, behind the pupil, is centred with tiny instruments and the gene therapy drug is injected under the retina and the vicinity of the nerve cells. These nerve cells will take up the drug. The eyes are treated one at a time. Once one eye is done, after about one week the other eye will be treated. While all this is being done with the surgery, the patient has a course of corticosteroids. That is to bring down any possible immune response to the drug since it is a modified virus. The procedure takes about 50 minutes to perform from beginning to end.

Recovery of the patients is quick, says Maguire. “We have actually documented that the retinal function can improve in a matter of days. We have done special testing of pupil’s response, and I think around five days after the procedure, we were able to establish that there is much greater retinal sensitivity,” he says.

Creed Pettit from Florida was the first child to be treated with Luxturna after its approval. Creed’s mother Sarah was interested in enrolling him in clinical trials with Luxturna for years, but he either could not or would not navigate the maze test used in the trial.

Creed was born with a rare genetic mutation that causes LCA. Until now, there have been no treatments for Creed’s blindness. When Luxturna was approved, Sarah wasted no time in getting his surgery scheduled.

“He had his right eye done on March 21 and left side on March 28. He is doing great right now,” says Sarah.

Luxturna, administered as a single dose, would cost about Rs 2.69 crore per eye, making it one of the world’s most expensive medicines ever marketed. However, Spark Therapeutics has promised to reimburse patients if the treatment proves ineffective. They are also working with health insurers to create innovative pathways that may serve as models for other one-time administered gene therapies in the future.

There are more than 250 genes involved in vision. This breakthrough treatment may pave the way for the development of treatment for other inherited retinal diseases and causes of congenital blindness.